“Perfectly Adapted to Its Purpose and Fairly Indestructible”: A Cutting-Edge Tech Review from 1901
24 March 2020 by Grayson Van Beuren

This is the first post in a series exploring the most out-of-the-way corners of the history of science to be found in the Catalogue of Scientific Papers. Those unfamiliar with this fascinating source from the Royal Society should check out our description of the CSP.

This post is about a device that was everywhere in retail and business until roughly the 1970s, at which point it quietly dropped out of the public eye. I’m talking about the mechanical calculator called the Comptometer. If that name doesn’t ring any bells: that’s okay. You have very little chance of coming across one nowadays, as everything it once did is now possible to do with pocket calculators, computers, and smart phones.

We live in a world where electronics—especially computers and smart devices—get more powerful every year. At the very bottom of the pecking order are electronic calculators, which now exist as basic utilities included in a computer operating system or as free apps on a phone.

Can you imagine a time when a new version of a calculator was such a novelty that people were skeptical of it’s worth? Yet that was exactly the case in 1901 when a physicist named C. V. Boys wrote a review of a calculating device called a “Comptometer.” Th 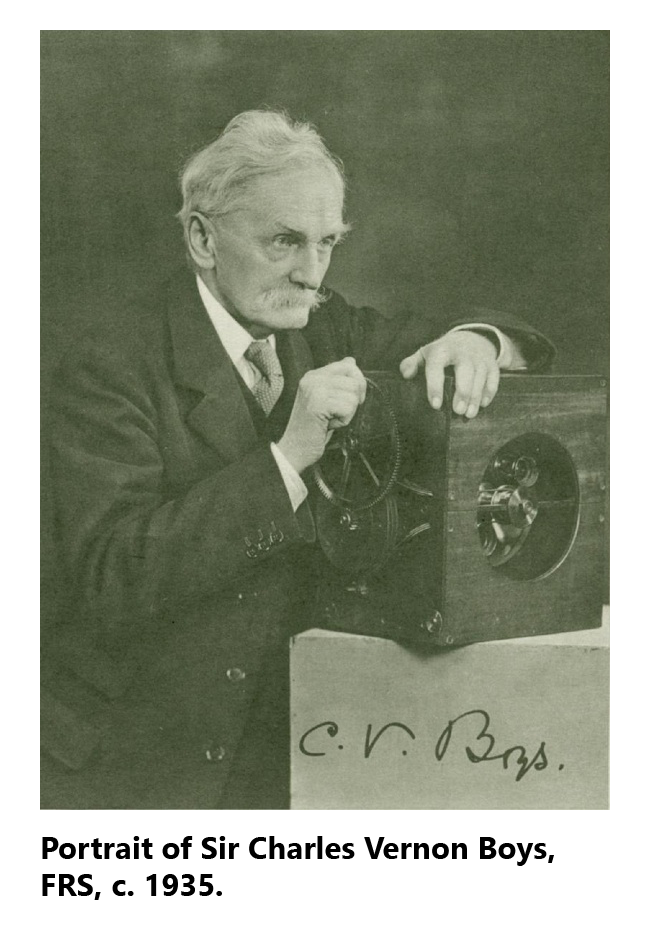 is new device sported a tray of keys set in repeating columns showing the numerals 1 through 9. Along the bottom was a row of windows through which digits appeared.

The Comptometer had first appeared for sale over a decade earlier in 1887, but hadn’t caught on very well in Boys’s native England by the time of his review in 1901.1

The main issue that plagued the Comptometer was confusion. Throughout the nineteenth century, a type of device called the artithmometer was the sole variety of mechanical calculator used by the general public.2 The arithmometer was quite easy to operate: the user set the sliders to the desired digits to add, turned the crank to perform the operation, then looked to the windows of the display to see the answer. Repeat as required. Simple. 3

Compared to the arithmometer, the Comptometer was a baffling array tray of buttons. Where was the operation crank?4 How were calculations performed? As a practicing scientist (and arithmometer user), Boys shared these skepticisms. Yet he was also open to alternatives:

I should like at the outset to express the feeling of curiosity with which any one, familiar with the many arithmometers now so generally in use, must introduce himself to the examination of the comptometer.5 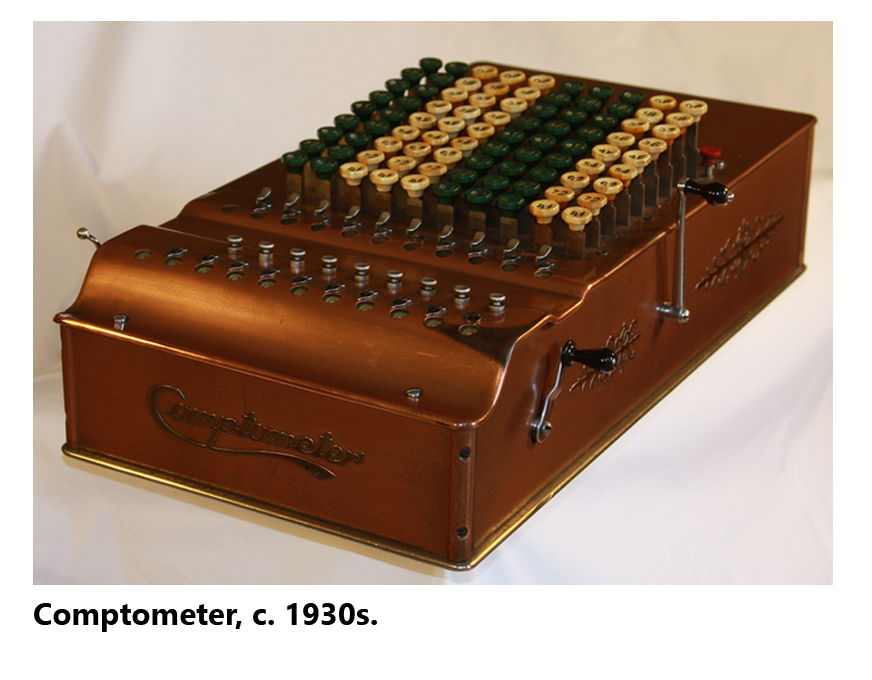 However, in the course of his review Boys also uncovered several reasons why the Comptometer was sometimes a better option than the trusty arithmometer. These advantages are hinted at by the comparatively widespread adaptation of the device in America, where time saving was valued above all else:

[…] it was only the knowledge that the comptometer was extensively used in the United States, where appreciation of time-saving appliances is more developed than here, that made me feel that the comptometer must have advantages perhaps more than sufﬁcient to compensate for its operative deﬁciencies.6

What were these advantages that attracted American users to the device like a moth to flame? Speed was one. Unlike the arithmometer with its set-then-compute crank-based action, the Comptometer performed calculations instantaneously. For example, to add 8 plus 10 the operator presses the “8” button in the first (ones) column followed by “1” in the second (tens) column. The sum instantly appeared in the windows along the bottom.7

Another plus: according to Boys, the thing was dang near impossible to break. 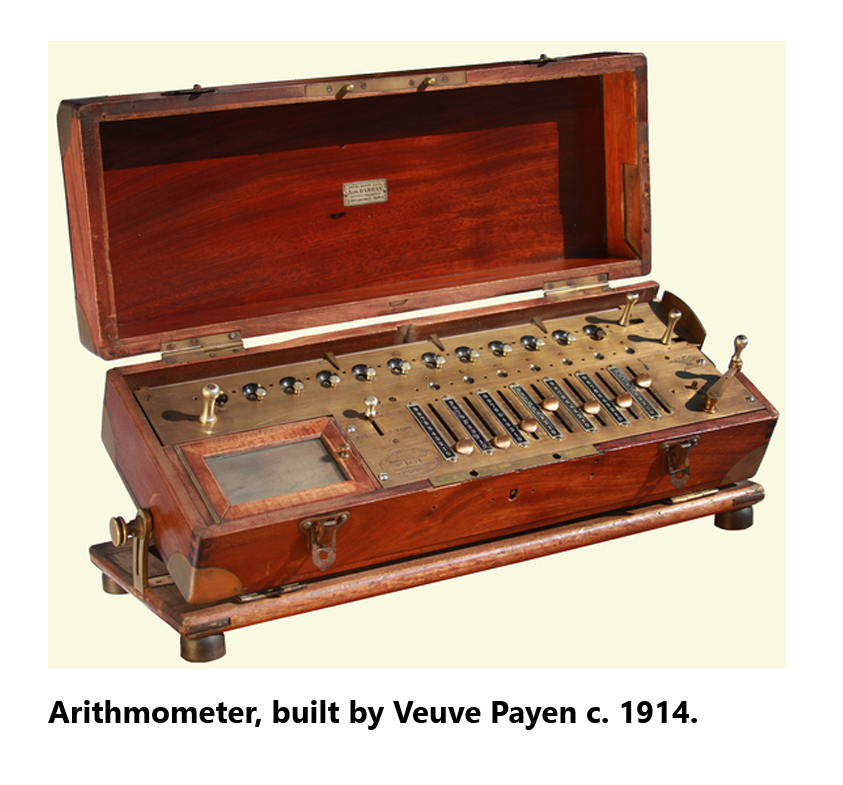 […] the construction is admirable, perfectly adapted to its purpose, and, I should judge, fairly indestructible.8

The device, however, came with some marked disadvantages, too. One of these was the lack of physical record of the performed operation once completed—a significant deficiency for a scientist or mathematician attempting to check their work. When using an arithmometer, the inputs of the last operation were laid out in the dials. Not so with the Comptometer, where the key presses themselves initiated computations:

If, therefore, a wrong key has been struck, except that the result is wrong there is no means of ﬁnding it out, whereas in an arithmometer it is usual to compare the setting and the record of the counting wheels with the ﬁgures given, to be sure that the actual operation given to the machine was that intended.9

Another disadvantage was the number of steps required to perform multiplication and division, since the Comptometer treated both operations as multiple-step addition and subtraction problems. However, Boys conceded that this difficulty was mitigated by the high speeds of entry possible with a skilled operator:

Its success is only rendered possible by the fact that it is a key machine, for key strokes may be so very rapid. The operating numbers on most arithmometers are set by slides and that is relatively slow, the operation, however, by the handle afterwards is vastly more rapid.10

In the end, the Comptometer did eventually see widespread success. The speed at which digits could be entered—especially by Comptometer touch-typists—eventually allowed it to win over the arithmometer with its slower crank-based action.11 The Comptometer was nearly ubiquitous throughout the twentieth century, until the 1970s when another device appeared on the computational horizon: the electronic calculator.

[2] Other devices existed, but the arithmometer was the most widespread. It was the first mechanical calculator with a robust-enough mechanism to withstand rigorous daily use. George C. Chase, “History of Mechanical Computing Machinery,” Annals of the History of Computing 2, no. 3 (July 1980): 204, https://archive.org/details/ChaseMechanicalComputingMachinery/mode/2up.

[4] Some models of the Comptometer did include a crank (see image) but it was used to zero out the digit windows, not to perform calculations.

[7] Subtraction was similar, but involved adding the inverse value of the intended digit and reading the result as in the next highest column. This sounds complicated but was fairly simple after some practice. For example, to subtract 8 from 10, the operator would add “2” to “10” and read only the first column as the answer (the “2” in “12”). To make things easier, the inverse values were printed on each key in a smaller font. Multiplication was achieved by multiple addition operations, and division by multiple subtraction operations. Boys, 266 – 277; Nigel Tout, “Operating a ‘Comptometer,’” Vintage Calculators Web Museum website, accessed March 24, 2020, http://www.vintagecalculators.com/html/operating_a_comptometer.html.

[11] Comptometer touch typing became a required skill in some fields. One trick used by typists was to only use the bottom half of the keyboard, the benefit being that the hands never had to move from their position and the typist lost their place. Using this method, a touch typist would hit the “4” key twice to add “8,” for instance. To cater to this practice, some later machines were built with only the keys for 1 through 5. Tout, “Operating a "Comptomete.’”