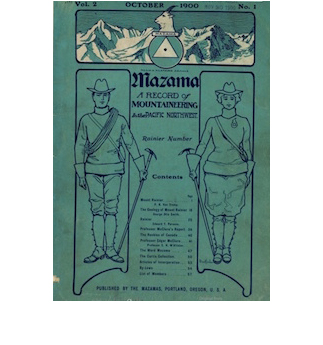 Our "Exploring" series continues with Frederick Faxon’s Annual Magazine Subject-Index, which ran from 1907 until 1949. When Faxon started his index in 1907, several large and mostly-comprehensive periodical indexes already dominated the library market. So why did he bother starting yet one more? As it turns out, this was a question front and center in Faxon’s mind from the outset—and one to which he had a ready answer. –Ed. 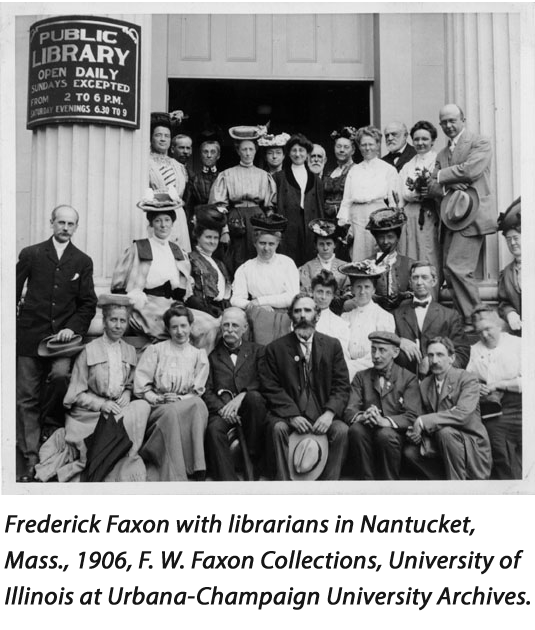 Compiler and Editor Frederick W. Faxon (1866 – 1936)1 opened the preface to the seminal 1907 Annual Magazine Subject-Index (AMSI) volume with an existential question: why does the library world need an additional periodical index?

This was a more pressing concern at the turn of the twentieth century than current-day readers might think. Periodical indexing was an already-crowded field dominated by the juggernauts of Poole’s Index to Periodical Literature, the Annual Library/Literary Index, and the Readers’ Guide to Periodical Literature.2 However, Faxon had a particular place in mind for his index, which he alluded to in his answer to the posed question:

The periodical field is so large today that neither of the indexes to non-technical magazines and reviews can cover it without loss. Many important periodicals are thus excluded from general use by librarians and students because there is no key to their contents.3

Faxon recognized that the large, unwieldy size of the general indexes necessarily meant a fair number of periodicals slipped through their indexing efforts, and he created the AMSI expressly to index this forgotten group. This remained the major rule defining the scope of the index for its entire run of publication.4

…why [did] the library world need an additional periodical index?

The particular scope of the AMSI created some quirks in content, which Faxon readily (and boastfully) acknowledged. It skewed the index toward esoteric subjects not heavily dealt with elsewhere. In his preface to the 1911 annual volume, Faxon entreated the reader to look to subject headings where his index exceled: “Exploration, Travel and Mountaineering, Outdoor life, Political and social economy, Municipal affairs, Art, Architecture and Photography, Forestry and Irrigation, Business and Finance, Education.”5 In another preface, he proudly touted the representation of foreign articles in the AMSI, stating “ours is the only index covering the popular periodicals of Great Britain.”6 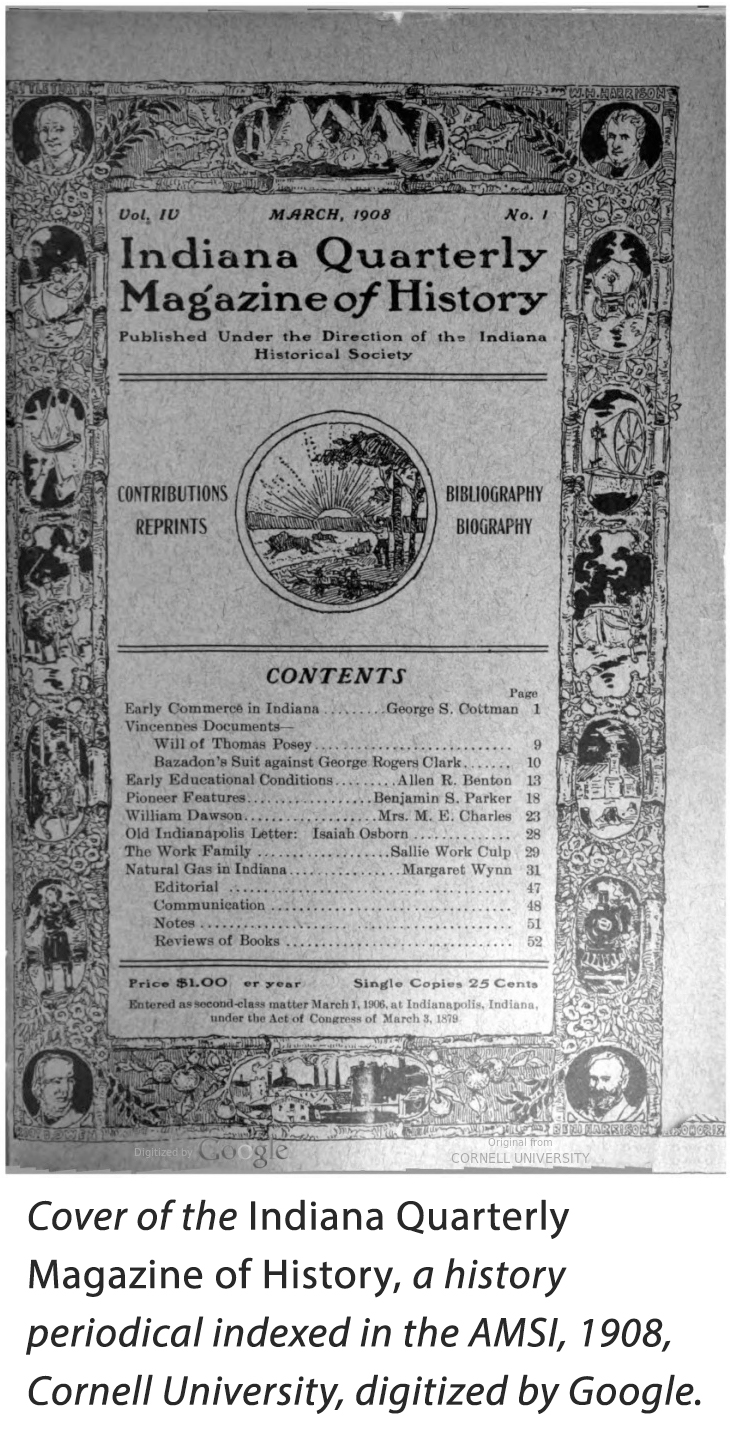 If there was one area of his index that brought Faxon pride, it was the sections on history. The AMSI provided a view of historical periodical literature not offered by other general indexes at the time. About half of the journals covered were historical in nature, with a focus on local material.7

This focus existed as early as the AMSI’s inception in 1907, when Faxon bemoaned that “the field of State History is well covered by the historical publications of various state societies, but not one of these is indexed by either the Annual Library Index or Readers’ Guide to periodical literature.”8 Faxon recognized that this omission created a great hurdle for historians—especially new historians and students—and positioned the AMSI to reduce this barrier substantially.

By 1911, he felt he had made significant progress towards the fulfillment of that goal, reaffirming that the AMSI aimed “to cover all the historical periodicals and State historical society publications of the year” and daring any doubters to “reference […] such subjects as Indians, American; United States, Civil War or Revolution, and to the many entries under the different States.”9

The particular scope of the AMSI…skewed the index toward esoteric subjects not heavily dealt with elsewhere.

Researchers using the AMSI ought to be aware of an additional quirk of the subject scope: the lack of content relating to the dramatic arts and music from 1909 onward. This was due to Faxon’s decision that year to begin publishing all such content in a separate supplemental Dramatic Index.

Faxon stated the reason for this change in the preface to the 1909 annual volume: “the theatre is today of interest to a larger proportion of educated people, probably, than any other pursuits or recreation. This interest creates a constant demand for information in regard to plays and players.”10 Faxon—recognizing that this material appealed to a bigger audience than the AMSI proper—separated it from the main body of the index facilitated wider use.

Despite its beginning as a niche product, the AMSI quickly grew in relative completeness and popularity. As early as 1910, the project had grown to the point where Faxon had to bring on collaborators, as “having done this indexing for three years, [he] found that his time would not allow of its continuance.”11

If there was one area of his index that brought Faxon especial pride, it was its sections on historical subject matter.

By the late 1910s, AMSI had become one of the more popular periodical indexes—well-known and well-used. Faxon had such faith in the wideness of his audience that he forwent any extensive discussion of subject headings in the preface to the 1919 AMSI volume. In his words: “the scope of this index is too well known to need any long description.”12

The number of journals indexed had also increased significantly since its inception in 1907. The first volume covered a total of seventy-nine periodicals; by 1922, the index covered over 150.13 The increase in titles was partially due to other indexes ceasing publication, their constituent titles being spread among AMSI and other remaining periodical indexes. This occurred in 1911 when Poole’s Index folded, an event on which Faxon commented in his preface to the AMSI for that year:

This is a notable year in the history of Magazine Indexes owing to the discontinuation of Poole’s Index [....] Thus the Magazine Subject-Index henceforth divides the field with the Reader’s Guide, and as it has always refused to duplicate indexing done elsewhere, these two indexes [...] become indispensable to all the larger city libraries, and to every university or purely reference library.14

The Faxon Company continued to publish the AMSI until 1949, when the annual volumes ceased and the company moved on to different library subscription products. A 1964 total cumulation of all the published AMSI volumes marked the last appearance of the index in print.15

The AMSI is full of interesting historical tidbits found in early twentieth century periodicals. Check the index to find out…

What occurred during the first flight of Count Ferdinand von Zeppelin’s prototype “air-ship” over Lake Constance in 1900?16

What is the history of the old Spanish Missions in southern California? What relation did it bear to the “Mission Style” of turn-of-the-century architecture?19

How did historians at Harvard piece together limited Civil War records to determine the number of students who died in the conflict?20

What changes in understanding about the place of photography in art and leisure accompanied its application to the field of advertisement during the early twentieth century?21

… as well as the answers to many, many more research questions. Go and explore!

Thank you to Marlene Hurst and Peggy Fulton, whose thoroughly-researched and well-written memos greatly aided the writing of this piece.

[4] Faxon reaffirmed this rule in the preface to every volume of the AMSI from 1907 through 1922. His diligence in avoiding duplication formed the basis of the AMSI’s growth in popularity (and marketing copy). As Faxon laid out in 1910: “Librarians [...] are realizing more and more the importance of being able to direct an investigator to sources of information, even though not available in their own libraries. Thus the value of having at hand the Magazine Subject-Indexes is apparent, as they afford a mass of references absolutely different from those in all other indexes.” “Preface to Magazine Subject-Index,” Annual Magazine Subject-Index (1910), 10.