The primary source is the historian’s most prized asset. However, sources taken on their own are not necessarily interesting; it is how the researcher can see in them and through them, placing them in context to piece together historical narrative, that makes them intriguing. When used effectively, sources can truly be windows into history, and—like windows—they can be clear, dirty, foggy, even distorted and deceptive. 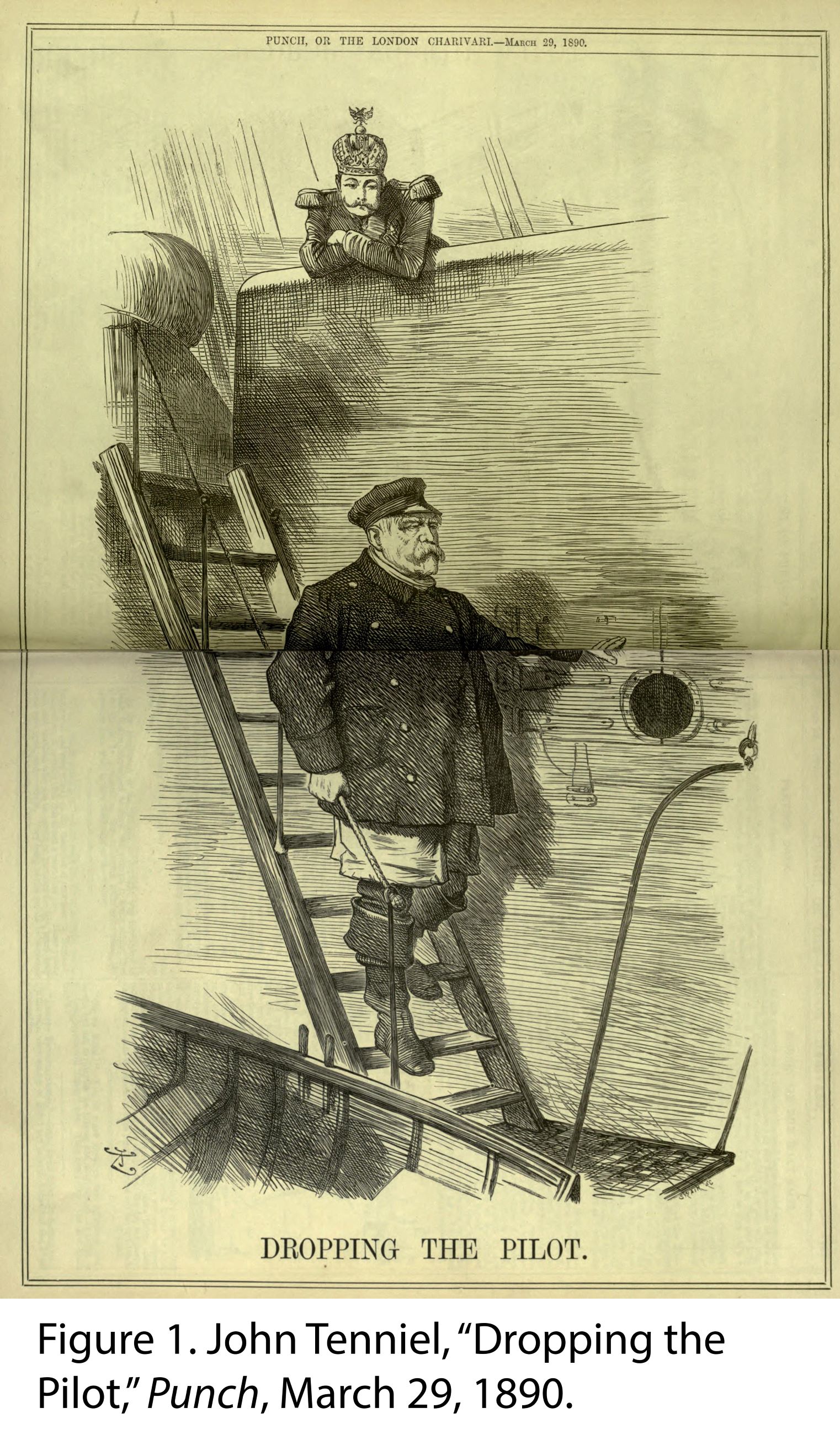 Political cartoons are an example of a relatively easy-to-see-through window, albeit one where apparent clarity can be deceptive. Since they are political by nature and are generally created to prop up one side of an issue, political cartoons have biases and distortions baked-in from the outset.

Consider a relatively well-known cartoon by Victorian cartoonist and illustrator John Tenniel. “Dropping the Pilot” (figure 1) appeared in the British humor magazine Punch in March 1890.1 The subject of the cartoon was a huge event in 1890 (and possibly still recognizable to modern viewers knowledgeable in German history): Otto von Bismarck’s ill-advised resignation as Chancellor of the German Reich at the request of Kaiser Wilhelm II.

The cartoon represents the clash between Chancellor and Kaiser with brilliant simplicity, paring down the conflict’s resolution to a single image. The young royal leans against the railing with his arms crossed looking down at the old mariner from his perch. Bismarck’s steely gaze and deliberate gait suggests the old “pilot” has grimly accepted his fate. In a poem that accompanied the cartoon in Punch, Bismarck might as well be a great hero from antiquity:

The “wakeful Palinurus” of old song

Drowsed at the last, and the floods his corpse did whelm;

But thou hast ever been alert as strong,

Pilot who never slumbered at the helm.

No “branch in Lethe dipped by Morpheus” slacks

This Pilot’s sight, or vanquishes his force.2

Bismarck is Palinurus, brilliant navigator for the hero Aeneas; he is immune to the hypnotic effects of the Lethe, the River of Forgetting that flows through Hades. From image to laudatory poem, it is very clear how Tenniel and his editors at Punch felt about his resignation in 1890.

However, it would be a mistake to take the image as the whole story. For one, in presenting this simple scene of a mariner leaving his ship, it belies a complicated set of political machinations and the set of warring factions that finally led to the resignation. In brief, it was a tale of old versus new in policies as well as attitudes.

The pictured Kaiser Wilhelm II took the throne of the German Reich in 1888.3 He cared little about the accomplishments of Bismarck and the previous Kaiser Wilhelm I in unifying the German states.4 To Wilhelm II’s generation a unified Germany was a given. They had never known any other setting, and treated unification as a jumping-off point for further conquest.5 Wilhelm II and Bismarck butted heads on this issue and others related to the governance of Germany until Bismarck finally made a political blunder and resigned in 1890.6 He was no passive player in his resignation and his ouster was not simply a case of a superior dismissing a powerless subordinate as the cartoon suggests. 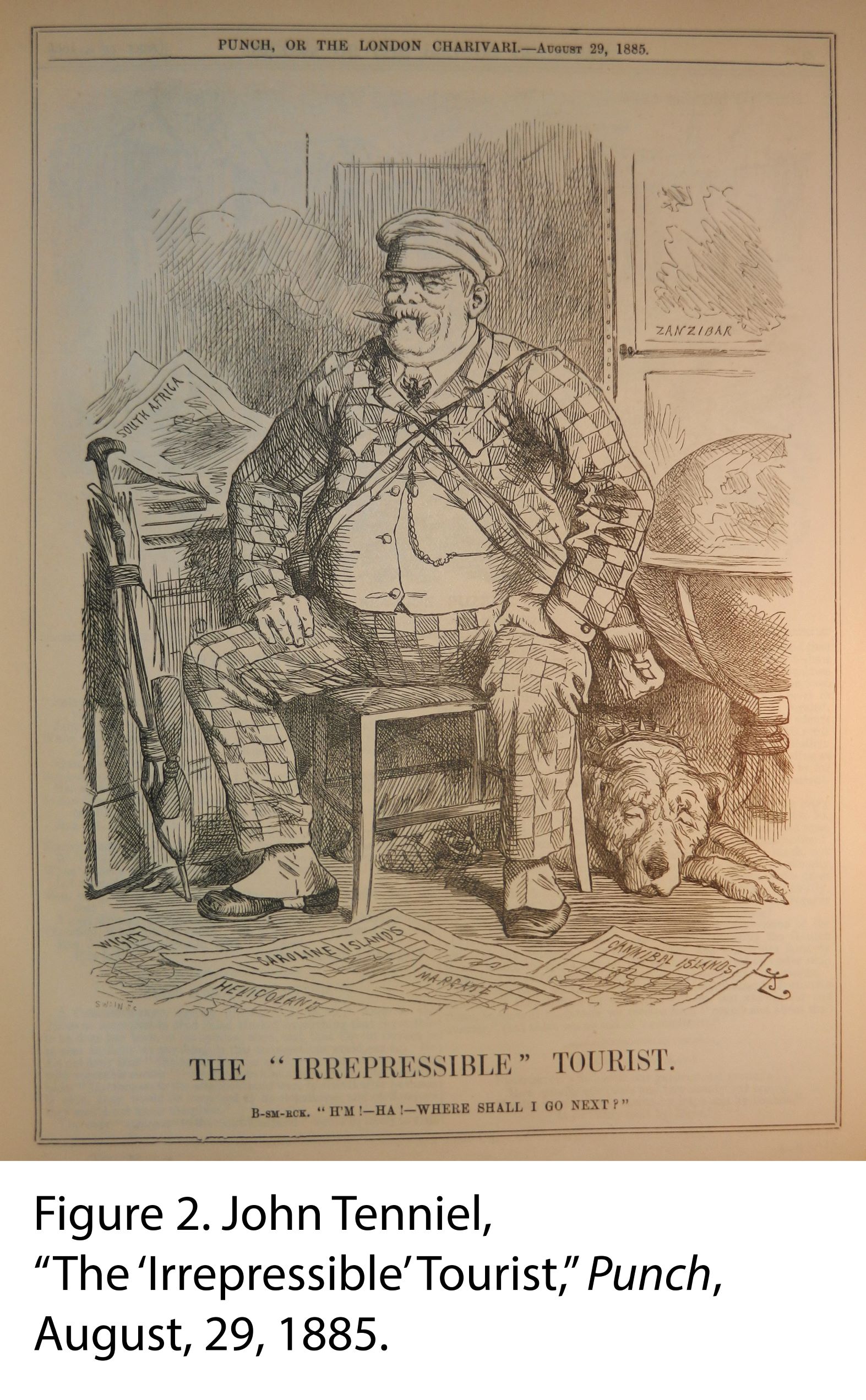 Another mistake would be to take this cartoon as representative of Tenniel’s or Punch’s—or even Great Britain’s—longstanding opinion of Bismarck. Consider another cartoon which appeared in 1885, nearly five years before “Dropping the Pilot.” This image, titled “The ‘Irrepressible’ Tourist” (figure 2), was also produced by Tenniel and also published by Punch. Yet despite being from the same artist and periodical, it presents the Chancellor in a very different light.7

Here, Bismarck is no noble hero carrying out an unjust order faithfully; he is a colonizing tourist, as dangerous as he is annoying. Bismarck squints at the viewer surrounded by maps of locations he has “toured” in the past and plans to visit in the future. “Where should I go next?” muses the Chancellor, mulling where he should turn Germany’s colonizing efforts. This image of a military gadfly is bolstered by the cartoon’s accompanying poem. No allusions to gods and antiquity here:

Most “commanding” sites, most “desirable” lots,

And he says, with a confident, and

A wink of the eye, “I’m prospecting!

Why no, to be sure, there is room for us all,

To check the stout Teuton John Bull has no call,

But—those who are blindest are nearest a fall,

And those who see sharpest securest.8

Unlike the fallen Bismarck of 1890, the Bismarck of 1885 is someone to be watched and “checked” by the other countries of Europe. He is Thackeray’s Billee, shimmying up yardarms to spy new lands and save his own skin.9 He is a perverse Germanic caricature of John Bull, the rotund English everyman and longstanding avatar for the British national character.10 He is anything but noble.

These two examples show the strengths and weaknesses of political cartoons as primary sources. The best ones show prevailing contemporary attitudes more lucidly than any other sources. However, the researcher must hold in mind that they are simplifications by nature, subject to the fluidity of prevailing opinions and always motivated by ulterior political motive.