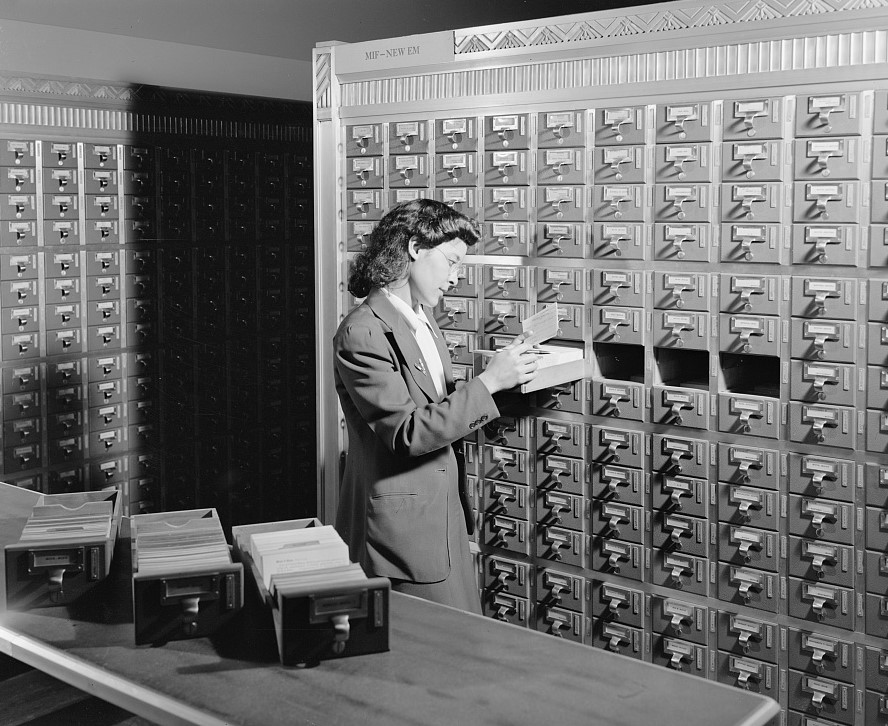 “Since many government publications become known by short titles that appear nowhere on the piece, and since libraries catalog them under institutional titles, a device for tying the two together is needed.”

A recurring challenge for historians is so-called “common knowledge.” Too often insights into day-to-day life, descriptions of extinct practices, and material ephemera—the hearty grist that gives dimension to historical research—are lost to the ages because they were either too common or too obvious to be written about. It is a problem that has not gone away, either. How many of us have family photos featuring mystery relatives whose names no one bothered to write down?

“A recurring challenge for historians is so-called ‘common knowledge.’”

This is the story of one resource that aimed to solve the dilemma of ephemeral common knowledge for future historians in the area of federal government research: the Library of Congress’s Popular Names of U.S. Government Reports: A Catalog (often shortened to Popular Names). Though the latest edition of Popular Names appeared in 1984, it remains a crucial resource to this day—relevant even in the midst of the internet age. 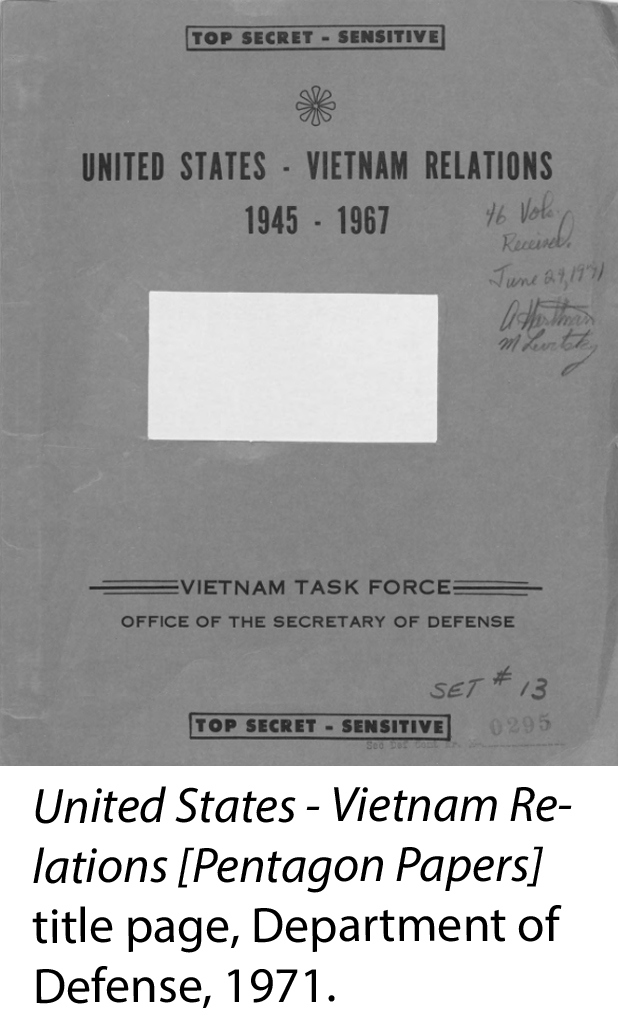 The United States Government churns out hundreds of reports a year, each named in a particular precise way that points back to its originating agency. These reports are cataloged by their long official titles, yet these monikers are rarely the way most people refer to them. Usually the public or the press adopts a shorter, snappier popular name which sticks far better than the original. (For instance, the famous “Pentagon Papers” don’t often go by their official title, “United States-Vietnam Relations, 1945-1967; Study Prepared by Department of Defense.”)1

However, as time passes and tacit knowledge fades, the link between a report’s official title and its popular name often weakens. The disconnection can be a huge issue for those who work with historical government reports, and ameliorating this problem was the goal of the creators of the Popular Names of U.S. Government Reports index. Documents specialist James Child summed up the targeted issue succinctly in his foreword to the first edition of Popular Names:

Individual reports have become identified through debate in Congress, and through various mass means of communications. The name of an individual may not even be mentioned in the title of the report, or in the text, or indeed in bibliographic references to it. With the lapse of time, the situation is certainly likely to become more frustrating.2

In creating the first edition of Popular Names, compilers Donald Wilson and William Kilroy looked to a similar catalog called Federal Acts by Popular Names or Short Titles as their model. Federal Acts had appeared annually since 1931, and—as suggested by its title—matched the popular names of laws to their official titles.

Wilson and Kilroy sought to do the same with the field of government reports. To that end, they collated and reproduced the Library of Congress catalog cards for 479 legislative, executive, and judicial reports from the previous seventy-five years, publishing the result as the first edition of Popular Names in 1966. This edition also added an index based on Library of Congress subject headings as an aid to researchers.3

Despite the amount of work that went into producing the first Popular Names catalog, it was far from exhaustive. The first edition preface ended with a concession that the index made “no claim to completeness.”4 Indeed, so many reports did not appear in the first edition—and so many reports were published after 1966—that the Library of Congress produced three more editions of Popular Names over the period of 1970 to 1984.

The second edition, published in 1970, added 274 reports bringing the total to 753. This edition also greatly expanded the date range of the catalog, including reports from as far back as 1821.5 The third and fourth editions were largely additive as well, but also went beyond simply augmenting the number of reports. 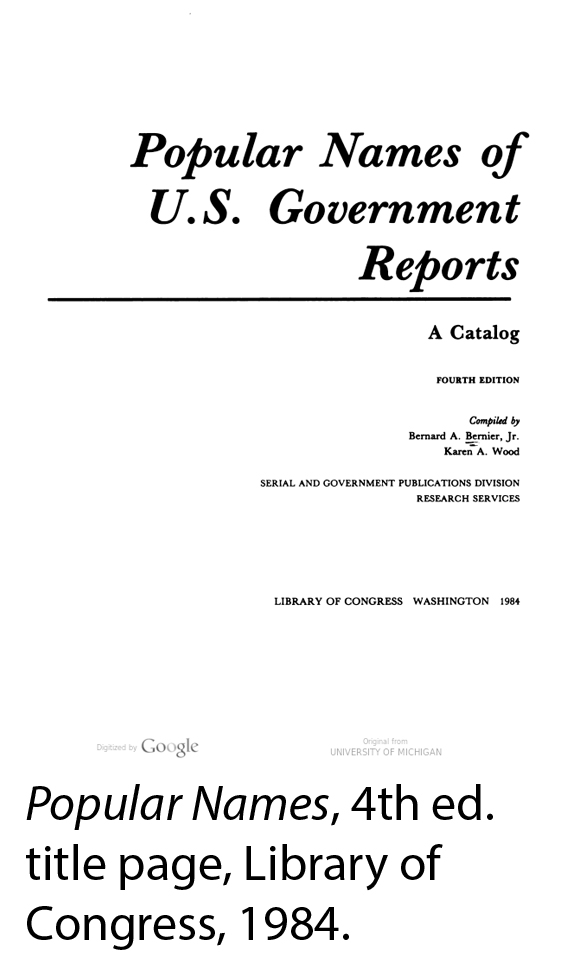 The 1976 third edition in particular greatly expanded the content of the catalog card entries. Instead of facsimiles of spare LC card catalog cards, entries in the third edition included annotations, citations to the Monthly Catalog or the Checklist of United States Public Documents, and Superintendent of Documents (SuDocs) numbers.6

The fourth edition (1984) largely continued with this format, but marked the one exception to the rule that each edition be cumulative and additive with respect to the one before. The third edition had included an “Impeachment Inquiry” chapter detailing all documents printed by the Government Printing Office that dealt with the Watergate affair and subsequent inquiry—a group that technically included documents other than government reports. This section was included due to the great public interest surrounding the Watergate affair when the third edition was published in 1976.7 When compiling the fourth edition, compilers Bernier and Wood decided to omit this odd section, possibly due to its outlier status with respect to the scope of the rest of Popular Names.8

“…for every one ‘Warren Report’ there are fifty obscure ‘Dodd’ or ‘Bartlett Reports’ that may not make it to the top of the search page.”

So what place does the Popular Names index occupy in the modern age of the internet, where all knowledge feels a single Google search away? The answer is that it fills a crucial niche in research. There is simply a lack of applicable alternative tools, and automated solutions (e.g., internet search algorithms) leave much to be desired in terms of completeness and adherence to controlled vocabulary.

The problem with assuming the internet will provide a “crowdsourced” solution to the problem of popular names has to do with the democratic nature of search algorithms. Search engines are fickle: popular and well-used reports may remain connected with their common names through a Google search, but there is no guarantee that less-used sources will receive the same treatment. 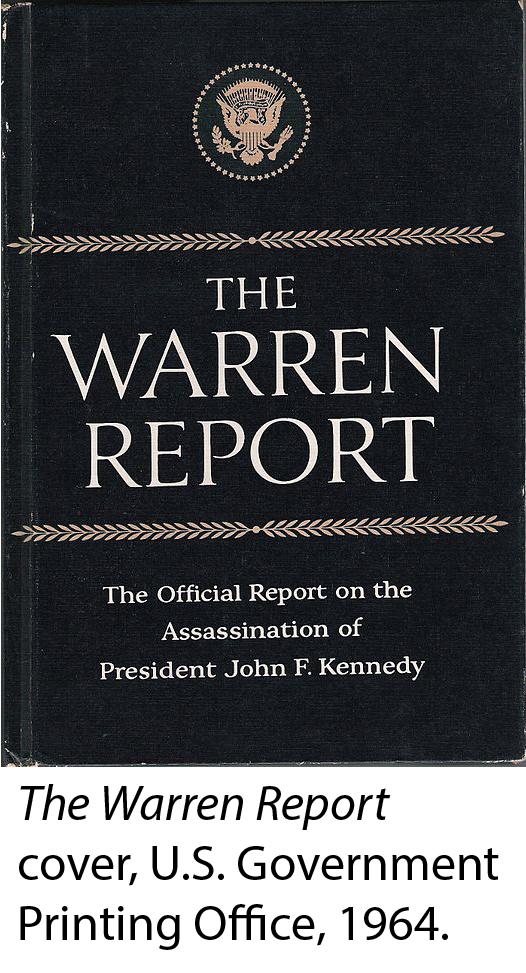 Certain reports which retain relevance or popular interest today may garner literature on the web—for example, the “Report of the President's Commission on the Assassination of President Kennedy,” a.k.a. the “Warren Report.” However, for every one “Warren Report” there are fifty obscure “Dodd” or “Bartlett Reports” that may not make it to the top of the search page.9

Alas, despite its being a crucial resource, Popular Names remains an incomplete one. There have been limited efforts to update the resource since the fourth edition appeared in 1984. Three supplements to the index appeared in various library journals between 1987 and 1994.10 Indiana University also created an online version of the index in 2004, with the aim of adding new records as suggested by users. However, this online version has since been discontinued.11 In any case, these efforts have been incomplete by nature, and none fill the need for a fully redone version of the resource. In the words of government document maven Joe Morehead, “a new edition of Popular Names is obviously overdue.”12

Users of U.S. Documents Masterfile: 1774 – 2019 can access all entries from the fourth edition Popular Names of U.S. Government Reports, as well as entries from in the “Impeachment Inquiry” chapter included in the third edition. Check your institution’s database subscriptions to find if you have access to U.S. Documents Masterfile, or sign up for a free trial at https://public.paratext.com/customer/.